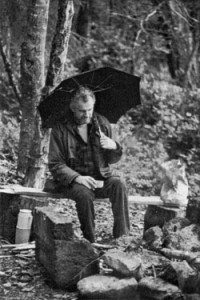 An edited version of this article was published in the Globe and Mail.

Born into an upper middle class Toronto family with Scottish roots, Sandy loved summer camp where he could live in nature. “Even as a child he was the sweet person who thought about others,” his sister Ann says.

In high school and university Sandy got summer jobs in logging and mining, living with working people, hearing their stories and identifying with their struggles for fair wages, decent working conditions and social programs.

For 30 years between 1958 and 1988 Sandy had 19 education-related jobs interspersed with prospecting jobs that took him into the mountains and wilderness he loved. As a teacher in public school, literacy and upgrading programs, prisons, and University, Sandy accepted every student the way they were and helped them to learn in their own way.

When he taught in a one-room school in a Native community in Northern Ontario, the school inspector took issue with his moccasins, no tie and his refusal to “recommend” children for residential school.  In Lytton, BC he lived on the reserve and shared in the community fight for a safe ferry to cross the Fraser River, while teaching in elementary and high school.  In 1969 Sandy taught along side Philip Paul in Victoria, B.C in a program specializing in First Nations education.  At the Native Education Centre in Vancouver he trained his native replacement teacher three months early to give back his salary to support the integrity of this First Nations program.

For years, his only possessions were what he could haul around in his old pick up truck.

In 1985 Sandy put down roots in Vancouver when we met and began our 25-year partnership in life and social justice work.  He became the historian of the Downtown Eastside, researching and writing the history of this low-income neighbourhood as part of a 100-year struggle for human rights.  His quote:  “Memory is the mother of community,” resonates throughout the low-income neighbourhood.  In 1996 he fasted for eight days, to protest the end of the Canada Assistance Plan and with it human rights for people on welfare.

Sandy wrote several books of beautiful poems and hundreds of articles about class, social justice and precious people mostly for the Carnegie Newsletter, the voice of Vancouver’s low income Downtown Eastside community.  When he died the poster on the notice board at the Carnegie Centre called him, “a wonderful encourager and precious friend to many,” and the “conscience of the community.”

Sandy could see who people really were and help them find the path that was right for them. “With Sandy, you just have to be present and you feel like you are included,” said his friend Maxine Pape.

Four and a half years ago Sandy got shingles.  The rash left but the pain never did.  Social justice was such a huge part of Sandy that when he’d think of governments refusing to increase low welfare rates, or build housing for the homeless, the pain from his shingles would increase and he’d have to meditate or take a walk to try to push it down.

First Nations people had a special place in Sandy’s heart.  From them he learned about what he called, “a way of being in the world,” that helped his own life becomes more meaningful. In one of his last articles Sandy wrote about how he hoped this way of being could also help the whole planet to survive with more justice.

An except from One Hundred Years of Struggle

When men of great power
deny the humanity of human beings
and the history of a community,
They tend to think
That they can destroy
both the people
And the place
without moral qualms.
The Downtown Eastside has
a long history, however,
and a rugged identity.
It is not expendable,
and it is not just skid road.
We are strong
when we stand in solidarity
with those who have fought
for human rights
for over one hundred years.
Memory is the mother of community.

Read the full poem, One Hundred Years of Struggle…